This is my first MMA highlight video.
It's of Julio Sotomayor, who trains at the Gracie Academy in Torrance. These clips are his ammature fights, but he's 1-1 as a pro. He'll be fighting again in November at the TFA event in Long Beach, CA.

Check out his fighter page on WarMMA.com
Posted by WAR MMA at 10:56 PM No comments:

LBFN 2 Knockout of the Night Video

Commission on Slice-Petruzelli: No Wrongdoing

The end arrives for EliteXC

Behind the Scenes of ProElite and EliteXC’s Demise
Posted by WAR MMA at 1:14 PM No comments:

Ryan Rogers vs. Demetrice Woods
After Roger’s takedown attempts nearly lands both fighters out of the ring twice, Woods finally ends up on top and lays down some ground and pound before electing to stand. As they trade swings, a body kick by Rogers is caught by Woods who takes him down and wedges him into the corner where he achieves mount and attempts to strike from that position. Then, for some unknown reason, referee Cecil Peoples stands them up where they both swing for the fences.
Round 2 begins with Rogers dropping Woods with a punch and immediately goes to the mount and sets up an arm triangle. Woods is forced to tap at 31 seconds of round 2.

Tommy Lee vs. Marlin Gustafson
After a brief exchange, Lee shoots and takes Gustafson down. Gustafson goes for a leg and during the scramble, winds up on top. He eventually mounts, but is quickly rolled and Lee finishes the round punishing his opponent from the half guard. In round 2, the fight is up and down with Lee shooting for his second takedown only to fall prey to a Gustafson guillotine at 1:30. 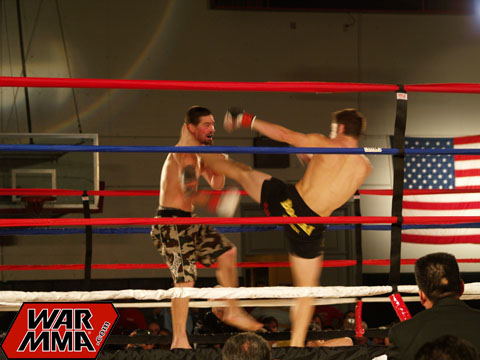 The entire fight was a kickboxing clinic thanks to Mr. Mellotti. By the end of the first round, Jones’ stomach and face were bright red as a result Mellotti’s body kicks, head kicks and punches. Jones’ valiant attempts to hang with Mellotti in round 2 were answered with a wicked head kick which dazed him. Mellotti then caught him with a flurry of punches and then put an exclamation point on it with a shin to the chin while his opponent was on his way down to the canvas. This one was all Mellotti, KO in 2:00 of round 2.

Cory Johnson vs. Vince Ortiz
Round one sees Ortiz take Johnson shoot a double only to land in a tight Johnson guillotine. Ortiz eventually escapes, drops some bombs and ends up mounted. Johnson rolls Ortiz and proceeds to drop elbows from the guard. Ortiz attempts a triangle only to get picked up over the head of his opponent. He lets go just before being slammed Rampage style and then goes for a guillotine. It was tight, but Johnson stuck it out was saved by the bell.
In round 2, Ortiz takes Johnson down and proceeds to drop bombs from his open guard. He eventually transitions to the mount. As Johnson attempts to bump his opponent off, Ortiz gets him in what looked from my angle like a school yard head lock. Johnson tapped at 1:44 of round 2 by what the announcer said was and armbar (It was an probably an Americana).

Raja Shippen vs. Chad Walter
Shippen starts out with a high kick and then moves to the clinch where he picks Walter up and throws him down like a rag doll. Shippen gets the mount but is quickly rolled and Walter ends up in his guard. Shippen manages to get up to his feet and get a body lock on Walter. It’s back and forth, up and down the entire round.
In round 2, they each trade kicks, but Walter catches Shippen’s leg and tosses him on the mat. Eventually, though, Shippen is able to take his back, transition to the mount and go for an arm triangle. Although Walter is able to escape the arm triangle and roll Shippen over, Shippen secures an armbar during the transition and forces a tap at 2:31 of the second round. 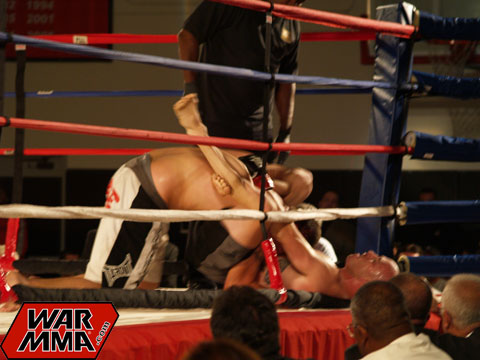 Karsky starts out by throwing a kick and Hubbell heads straight for the clinch. He’s able to get the takedown and finds himself in a guillotine. After his head pops out Hubbell begins the GNP. After and unsuccessful armbar attempt, Karsky eventually gets the reversal and ends the round on top.
In round two, Karsky again begins with a kick. They clinch. Hubbell gets the takedown, moves to side mount, then mount, then he takes the back. However, Karsky is able to escape and ends up in his opponent’s guard. Now it’s Karsky’s turn to GNP. He stands up in the guard getting ready to throw bombs when Hubbard lands an up-kick and is eventually able to kick off his opponent and get to his feet. The round ends with Hubbard stuck in a tight guillotine and is saved by the bell.
In the last round, Karsky swings and misses with a slow-mo spinning back-fist. He clinches and Hubbell drags him down on top of him and starts working the rubber guard. Hubbell eventually passes his leg over Karsky’s shoulder and is working to cinch in the triangle while adding some strikes to his head. The bell rings and Hubbell is declared the winner, 29-28, 29-28, 30-27 by UD.

Preston Scharf vs. Alex Rickards
This was a quick one. Leg kick, thai clinch, body lock, take down, ground and pound ref stoppage at 1:05 in the 1st. It was all Scharf. 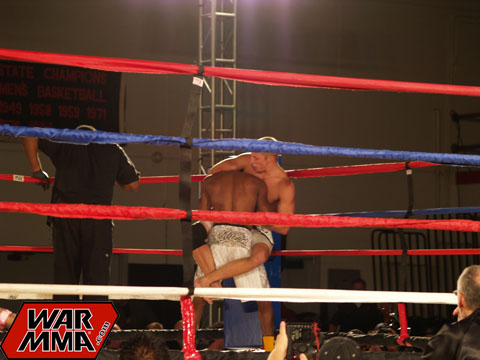 After a brief exchange on the feet, Eazel went for double so Castile counters with a quillotine attempt. Eazel picks him up and carries him around the ring for a while till he finally decides to slam his opponent’s face into the canvas. Castile is still awake but lets go of the choke and ends up with Eazel in his guard. He attempts a triangle but Eazel escapes to his feet. Castile gets a takedown but Eazel reverses him and finishes the round in his opponent’s guard.
After the bell, Eazel pointed to the mat where Castile’s contact lens had fallen. Castile then spent the next couple of minutes trying to stick it back in his eye. It was really weird.
Anyways, round 2 begins with Eazel throwing a body kick, shooting a double and getting a slam. While on the bottom, Castile goes for a omaplata but Eazel escapes and eventually stands up. Eazel gets another slam and the round ends with Castile doing his best to land strikes from the bottom.
Round three begins with both fighters trading kicks and combos. Eazel picks Castile up over his shoulder and slams him yet again to the delight of the crowd. Castile spent most of this round on his back and Eazel picked up the unanimous decision, 30-27, 29-28, 30-27.

Dominic Verdugo vs. Marcus Ajian
Ajian opens up with a slam and a guillotine attempt. Verdugo is able to flip over and escape and eventually get to his feet and into a clinch. Verdugo then gets the takedown, only to get caught in another guillotine. This time he’s forced to tap at 1:50, round 1.

Click here to see the photos of all the fights.
Posted by WAR MMA at 5:49 PM No comments:

I'm fascinated with how quickly fighters who are on "The Ultimate Fighter" reality show go from relative obscurity to fame in such a short time. I decided to figure out a way to measure just how quickly their fame and popularity increased as a result of the show and the only way I could think of was MySpace. Fighters use MySpace to connect with their fans. Some of the most popular fighters in the UFC have thousands of MySpace friends which allows them to reach out and communicate with all of them very efficiently. For example, Tito Ortiz has 156,027 friends, Chuck Liddell has 105,243 and Forrest Griffin has 93,887.

So before The Ultimate Fighter Season 8 aired, I did a search on MySpace to find each of the 32 contestants' MySpace. I noted how many friends each of them had at the beginning of the show and each week after the show airs, I'm tracking the increase of MySpace friends of each of the contestants (at least the ones that I could find). The fighters that I couldn't find on MySpace, I did a search on Facebook instead. Then I stayed up late one night and made a spread sheet which I posted on the web here.

Right now we are about half way through the season and the top three fighters with the greatest increase in MySpace friends are:

Keep checking http://www.warmma.com/TUF8Experiment.html if you want to track their progress. Remember, when it comes to MMA, the more fans you have, the more money you can make.

Anderson Silva Talks Retirement in 2009 (check out the video)

A Night of Combat Friday on HDnet

Main card will air on Spike TV in the United States at 9:00 PM (ET/PT) on same-day tape delay

Aaron Davis
Posted by WAR MMA at 4:40 PM No comments:

* Based on MMAWeekly.com World MMA Rankings