Main card airs live on Showtime in the United States at 10:00 PM (ET/PT)

* Based on MMAWeekly World MMA Rankings
Posted by WAR MMA at 9:38 AM No comments:

Main card airs on pay-per-view for $44.95 in the United States

* Based on the MMAWeekly.com World MMA Rankings

Another Amazing Bellator Finish
Posted by WAR MMA at 2:37 PM No comments:

Call To Arms I

Fight 1
Johnny Gomez, Blue corner
Francisco Rivera, Red corner
Round One
Rivera explodes onto Gomez and then takes him down to his guard. Gomez is able to escape and they both stand up.
Round Two
This round was all standup, a good mix of leg kicks and body shots from both combatants. Round ends with Rivera throwing a flying knee, no damage.
Round Three
Mostly standup again in this round, a few attempted take downs early in the round both seemed content with letting it go to the judges for scoring.
Rivera, 30-26, 30-27, 30-27

Fight 2
Harold ‘The Constrictor’ Lucambio, Blue
Sevak Magakian, Red, 157lbs
Round One
They tie up and Magakian tries a hip toss and misses. They both land on all fours and Lucambio takes Magakian’s back. Lucambio is too high on his back. As he falls off, he tries for an arm bar, and misses. They are both on the ground in a heap of twisted arms and legs trading leg locks. Magakian finally turns for a knee bar and gets the tap.
Magakian, Kneebar 1.59 1st round

Fight 3
Jay Silva, Blue, 184.5lbs.
Reggie ‘Iron’ Orr, Red, 185lbs.
Round One
Silva comes out strong early. Orr seems a little tentative. Silva starts head bobbing and taunting Orr, trying to get him to participate in the fight. From the clinch, Silva leg trips Orr and falls into half guard. Orr rolls and gets guard. Orr rotates his hip for an arm bar. Silva picks him up and slams him. Both fighters stand up. Orr is able to take down Silva two more times, but each time Silva is able to stand up. From the clinch Orr is able to take Silva’s back standing, Silva locks in a kimura while standing and takes down Orr and lands in half guard. Orr is able to work a sweep from butterfly guard and stands up. A few more take downs and escapes and Orr takes a knee to the groin. The ref separates them, and then the fight continues.
Round Two
Silva throws a left flying knee catches Orr on the left side of the head ending the fight.
Orr, Flying knee, 2nd round


Fight 4
Brett Cooper, Blue, 168.5lbs.
Joe ‘The Show’ Cronin, Red, 170lbs.
Round One
Both fighters stance before the bell, indicates they are going to charge out like bulls; nope, they walk to the center and touch gloves. Cooper knocks down Cronin and is standing over him in the open guard throwing punches. Cooper backs off and motions for Cronin to stand up, the ref gets between them and tells Cronin to stand. When Cronin stands, the ref stops the fight to look at a cut, the Doctor is summoned and the fight is stopped. Cut to the right eyebrow.
Cooper, Doctor stoppage, 1st round 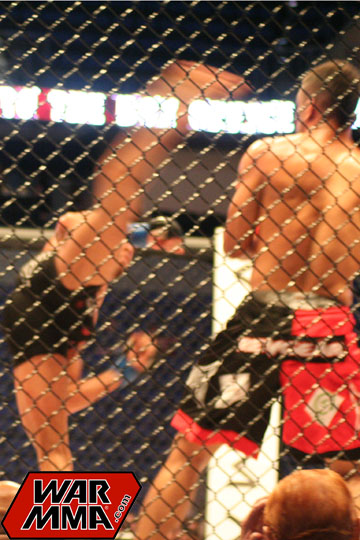 Fight 5
‘Superfly’ Matt Major, Blue, 184.5lbs.
Jamie Fletcher, Red, 183.5lbs.
Round One
Major starts with a right leg kick. Mostly standing the whole round. A couple of take down attempts by Fletcher. A good mix of punches and kicks. Most of the round was spent in the clinch. Most exciting part of the round was when Major lost his mouth piece.
Round Two
Fletcher comes out a little more aggressively with leg kicks. Major loses his mouth piece again and continues to grab the fence. I am a little surprised the ref hasn’t warned him yet.
Round Three
Major does a couple of spinning back kicks. Looked pretty. Fletcher takes down Major, but Major is able to stand back up again. Fight ends with a take -down, fighters are on their knees in a north/south position.
Major, 30-27, 29-28, 29-28

Fight 6
Alvin Cacdac, Blue,140lbs.
Chad ‘The Savage’ George, Red, 138lbs.
Round One
Cacdac takes down George and gets him in a guillotine in the full mount. George is able to reverse him and in the scramble they wind up north/south on their knees. George is able to put Cacdac on his back and pass to side control, and does a good job of controlling him from side control because George refuses to let go of the guillotine. They reverse each other back and forth a few times and Cacdac gets caught in a triangle set up. He is able to escape and winds up in George’s guard. The round ends with one more take down and George is fully mounted on Cacdac.
Round Two
They clinch against the fence and Cacdac is able to trip George and falls into the open guard. Neither one of them improve their positions so the ref stands them up. Cacdac throws a head kick, stumbles and falls with George on top of him. George passes to side control. Cacdac reverses but George is able to get a guillotine from the bottom. Cacdac pops his head out and starts to do a little ground and pound.
Round Three
Fighters come out and give a two handed high five and George kicks Cacdac in the balls, Ref stops it and gives Cacdac a chance to recover. Cacdac is able to take down George, but it is quickly reversed. They move in and out of half guard, butterfly guard and side control. George is able to take Cacdac’s back. Fight ends with Cacdac defending a rear naked choke.
George, Split decision 30-27, 28-29, 30-27 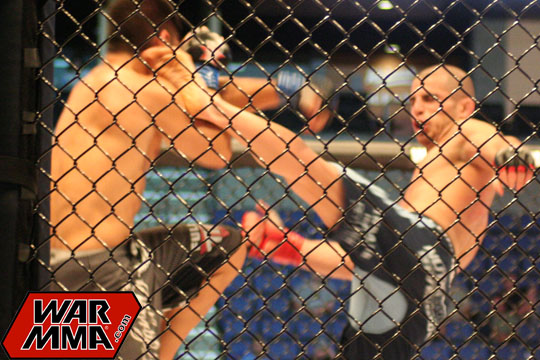 Fight 8
Mike ‘The Bully’ Sandez, Blue,164.5lbs.
Toby ‘Tiger Heart’ Grear, Red, 164
Round One
Early in the fight, Grear gets poked in the eye, ref stops the fight to look at it. Everything ok. Sandez lands a knee to Grear, Grear goes down. Sandez administer’s some ground and pound while in Grear’s half guard. Looks like Grear is ok and pulls Sandez close to avoid punches. Grear is able to escape and get to his feet. Grear takes down Sandez and is standing over him while Sandez is on his back when the bell rings.
Round Two
Grear is throwing unanswered leg kicks. Sandez spent most the round stalking Grear, no ground work.
Round Three
Sandez is still stalking Grear. Sandez throws a head kick, slips and falls, Grear standing over him delivering leg kicks while Sandez is on his back. After a scramble, both fighters stand. From the clinch, Grear takes down Sandez with a double leg and then stands over him, but doesn’t capitalize on his own take down.
Grear (30-27) x 3

Fight 9
Karen Darabedyan, Blue, 155lbs.
Joe Camacho, Red, 155lbs.
Round One
Fight was mostly clinching against the fence. At some point Darabedyan got a cut and the Doctor stopped the fight after the first round ended.
Darabedyan, Doctor stoppage, end of round one.

Fight 10
Jeff Ford, Blue, 238lbs.
Danial Puder, Red, 226lbs.
Round One
Ford throws a left head kick and misses, spins around and hits the mat on his right shoulder. Pruder jumps on him, but it is apparent that Ford is done and the ref steps in and stops the fight. After the fight Pruder starts taunting Ford in the cage. His poor sportsmanship and trash talk, pisses off the crowd and they boo him so loudly that while being interviewed you could not hear him.
Puder, Ref. Stoppage 1.23 1st round

Fight 11
Brian ‘Mr. Unbreakable’ Warren, Blue, 170lbs.
Tiki Ghosn, Red, 170lbs.
Round One
Tiki forces Warren against the fence and takes him down to his guard. He doesn’t improve his position so the ref stands them up. Tiki gets another takedown and gets caught in a guillotine on the way down, but gets out.
Round Two
Warren comes out with a pair of spinning back kicks, one lands, one misses. Tiki gets another takedown, passes and then gets Warren’s back. Warren is able to get his shoulders to the mat and avoid the choke. Tiki gets another double leg and passes to side control.
Round Three
More of the same.
Ghosn, (30-27) x 3 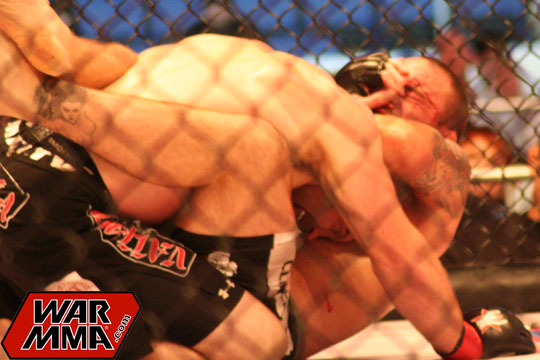 Fight 12
Jason ‘The Punisher’ Lambert, Blue, 205lbs.
Vladimir ‘The Janitor’ Matyushenko, Red
Round One
Lot of clinching against the fence. Matyushenko slips and Lambert falls on top of him into his guard. Passes back and forth between full and half guard. Ref stands them up. Bell rings.
Round Two
Matyushenko shoots for a double leg take down and gets caught in Lambert’s guillotine but is able to escape. Matyushenko takes down Lambert, but doesn’t improve his position so the ref stands them up, again.
Round Three
Lambert presses Matyushenko against the fence and is able to take him down with a double leg. Lambert does a good job with some ground and pound while in Matyushenko’s half guard. Matyushenko is able to escape and go directly to a double leg take down of his own and passes to side control. Lambert is able to get back to his feet only to be taken down again by Matyushenko. Fight ends with Matyushenko in side control.
Matyushenko, 30-27, 30-27, 29-28

Click here to view more photos of the event.
Posted by WAR MMA at 10:19 AM No comments: