In the Squeeze: Dale Hartt's "UFC Fights for the Troops" Journal, Part I

In the Squeeze: Dale Hartt's "UFC Fights for the Troops" Journal, Part I
This is a great Blog written by War MMA fighter Dale Hartt. His Signature shirt will be available soon at WarMMA.com 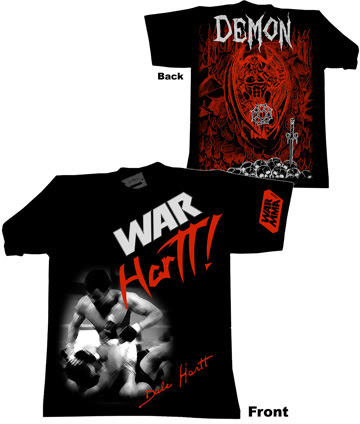 That was quick!
Posted by WAR MMA at 4:08 PM No comments:


STRIKEFORCE: NOVEMBER 21, 2008 IN CALIFORNIA
venue: HP Pavilion in San Jose, California
To be broadcast on HDnet 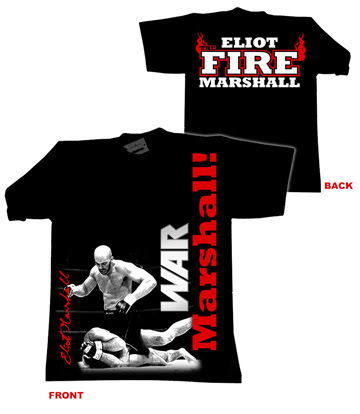 Main card airs in the United States on pay-per-view for $44.95

Main card airs live on Versus in the United States

*Based on MMAWeekly World MMA Rankings

UFC Flags Leben for Steroid Use

McCarthy Returns as Referee
Posted by WAR MMA at 5:08 PM No comments:

I had to fly solo this time and forgot to bring a tape recorder so I wasn’t able to take the pictures of the event and take notes at the same time. Instead of a play-by-play, I’m just going to describe my experience at the California Extreme Fighting event on October 30, 2008.
The venue looked like a large dance hall that just might have been a bowling alley in a former life. The ring was located in the center of the sunken dance floor and there were food and drink services on upper level near the door that ran the length of the room. The fighters prepared for battle in the far corner behind a curtain, next to a mechanical bull.
The promoter was nice enough to get me a folding chair and I staked out a spot next to the judges stool opposite the fighter’s entrance ramp and the stage where the go-go dancers performed in between fights. I must admit that it was about what I expected from a small show in El Monte, CA. However, although the production had a few glitches (they never seemed to be able to get the spot light onto the fighters during their entrances in time), once the fights started, the action in the ring and the overall event did not disappoint. 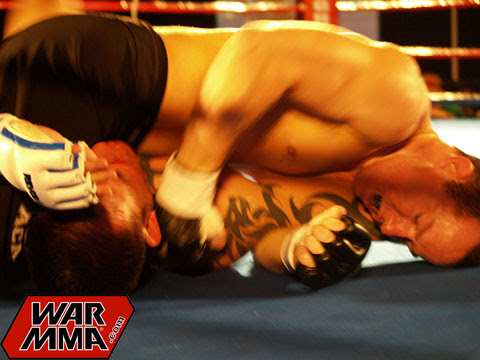 Although it was challenging trying to capture the action while worrying about lighting, timing, angles and whether I remembered to turn the flash off on my brother-in-law’s digital SLR, every once in a while I would pause to watch the fight and appreciate the fact that I was actually leaning on the mat. At the end of the Grear-McDavitt fight, Toby Grear dropped McDavitt with a punch and pounced on him. The ref looked like he was going to step in so Grear backed off. However, when the ref hesitated and didn’t stop the fight, Toby kicked McDavitt in the side harder than I’ve ever seen anyone kicked, ever. The slap was so loud, it echoed through the entire hall. 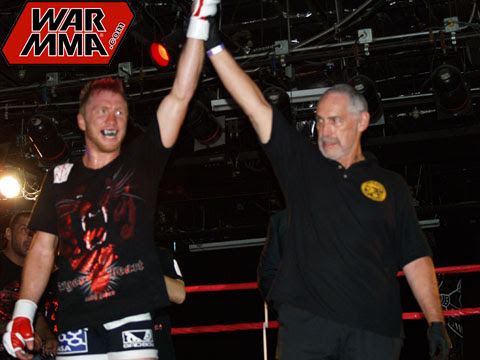 Every fighter demonstrated heart and determination in their fight that really doesn’t come across when you watch MMA on TV or from the nose bleed seats (where I usually sit). This was my first time shooting from ring side and this experience gave me a whole new appreciation for the courage that these fighters have. Hearing the thud of each punch and the slap of each kick drives home the reality of the pain they suffer. Hearing them breathe and seeing the expressions on their faces in between rounds humanized the fighters. Smelling the B O of the corner-men was, well, just gross. 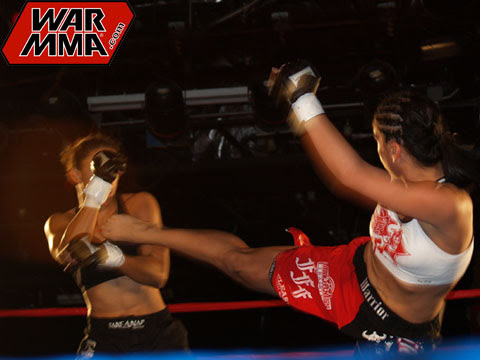 The most memorable moment of the night happened during the women’s fight. About half way through the Bagherdai-Hayes fight, my chair split like a wishbone and I found myself sitting on the floor. I heard a united “ooh” from the first few rows behind me, and then some giggles. Like a professional, I got up and continued taking pictures like nothing happened. I slid the chair underneath the curtain after the round ended and spent the rest of the night kneeling on my sweatshirt.
Notwithstanding my embarrassment, overall, the night was a great experience. The crowd was surprisingly respectful and the fights were exiting. Here are the results:

Fight 1
Cisc Rivera vs. Chris Drumm
Rivera by TKO, 46 seconds of round 1

Fight 2
RJ Clifford vs. Daniel Hernandez
Clifford by TKO, 2:37 of round 2

Fight 4
Angelo Catsoures vs. Greg Dalton
Catsoures by Triangle Choke, 2:00 of round 1

Fight 8
Tim Persey vs. Ross Clifton
TKO by submission due to strikes, 21 seconds of round 2

Fight 9
Toby Grear vs. Anthony McDavitt
Grear by TKO, round 3

Fight 10
Jaime Fletcher vs. Nick Braker
Fletcher by Guillotine, 2:41 round 3

To see the photos from the event, check out the War MMA Gallery
Posted by WAR MMA at 10:39 PM No comments: